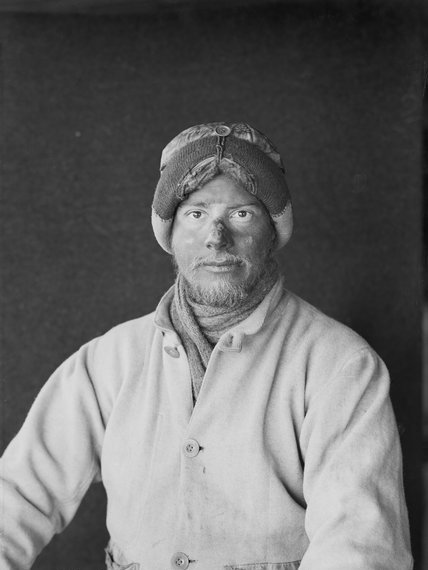 Scott’s decision to assent to such a dangerous venture, has long since come under scrutiny and criticism. Never before had a land journey been attempted during the dark, freezing Antarctic winter, and each of the three man team would be among the party for the approaching season’s Southern Journey, with both Bowers and Wilson seeing out its duration by standing at the Pole with Scott, and then tragically dying on the return journey.
Scott however could argue that scientific study was a predetermined aspect of the expedition, and he also used the excursion as an opportunity to experiment with the use of food rations and equipment ahead of the attempt on the Pole. Yet there seems little validation in any argument that can justify exposing three members of the polar party to such atrocious conditions.

On June 27th 1911 the Winter Journey commenced and the three men slogged of into the Antarctic darkness, hauling a sledge that carried over 340kg of supplies. From the offset the men struggled in a constant battle with the elements. The fierce winds whipped unrelentingly at speeds that seldom dipped below 60 mph, and coupled with temperatures that ranged between -45º C and -61º C, it rendered conditions almost unbearable.
It took the men 19 days to reach Cape Crozier, sometimes covering no more than a mile a day, in the tortuous conditions.

Cherry-Garrard would later recount the sheer horror of their experience in his excellent book The Worst Journey In The World, where he described how the three men shivered so violently in their tent that they thought their backs would break. Indeed so intense was the cold that Cherry-Gerrard’s teeth shattered from the constant violent chattering. He would require extensive dental treatment for much of his life as a result.

At one point after reaching Cape Crozier their tent was carried off in a blizzard, but they were fortunate enough to locate it about a half mile away, as it was a crucial factor in their chances of surviving the return trek. Whilst at the cape they had constructed an igloo, from blocks of ice, and had used a piece of timber they had brought with them as a roof. This structure too was almost destroyed in another storm, but it had been a useful base, from where they would visit the rookery and acquire the much sought after Emperor eggs. The men arrived back to the hut at Cape Evans, after a 36 day ordeal on August 1st 1911, with three eggs that had survived the return journey.

The wretched condition of the men upon their return from a 120 mile round trip, caused great concern among the group, regarding the Southern Journey, which would be a trek in excess of 1,800 miles on foot.

Quote – “Madness or death may give relief.”
Apsley Cherry-Garrard on a thought that arose while enduring the horrors of the intense cold on the Winter Journey.

One Reply to “Wilson, Bowers and Cherry-Garrard set off on the Winter Journey”