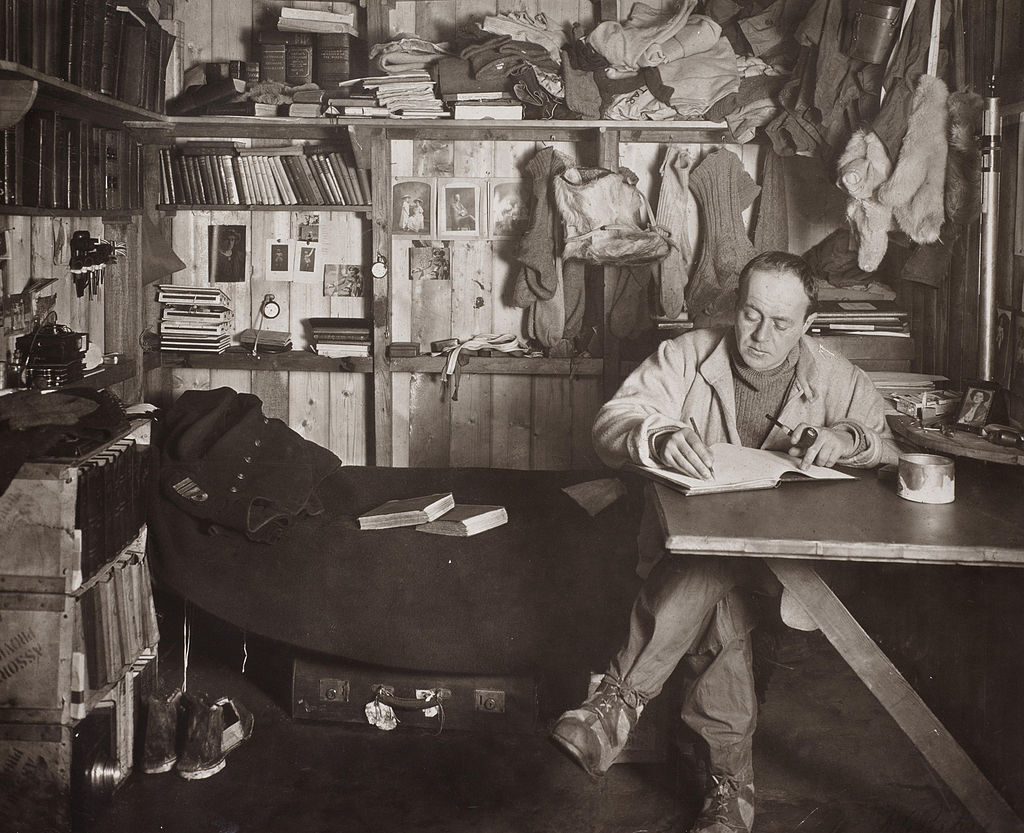 With pictures of his wife and son behind him, Captain Robert Falcon Scott (1868 – 1912) writes his journal in the Winterquarters Hut, in the Ross Dependency of Antarctica, during the Terra Nova Expedition to the Antarctic. This photograph was taken on 7th October 1911, less than a month before the tragic Southern Journey.

On October 7th 1911, Herbert Ponting, the official photographer on the Terra Nova Expedition, captured this famous image of Robert Falcon Scott updating his journal, in the comfort of the Winterquarters Hut, at Cape Evans Antarctica. The hut which was constructed shortly after the expedition arrived in the Ross Dependency in 1911, is more commonly known as Scotts Hut.Scott would depart the hut on November 1st 1911, with his Southern Party, as they embarked upon their quest to be first to reach the South Pole, and of the sixteen men, only eleven would return. Scott, Evans, Wilson, Bowers and Oates, did successfully reach the pole, but arrived there in defeat, having been beaten to the accolade by Roald Amundsen, who preceded them there by more than a month, claiming the pole on December 14th 1911.
All five men would die on the return march, and Scott’s journal, which was later found with his frozen body, gave a detailed and desperate account of the Polar Party’s tragic fight for survival, that ultimately they would lose.
Even as Scott, Wilson and Bowers lay dying in their tent on the Ross Ice Shelf, he continued to painstakingly record the details of their plight. With his trembling, frozen hand, Robert Falcon Scott penned his final entry on March 29th 1912, and it is assumed he died shortly after.